The tower formerly known as Stark Tower and Avengers Tower is a high-rise building complex located in Manhattan, New York City. Constructed by Tony Stark, the tower is powered by an Arc Reactor that makes it capable of running itself for over a year, and its electronic systems are maintained by J.A.R.V.I.S.. The top ten floors were originally all devoted to research and development.

The tower became the focal point of a battle when Loki and Erik Selvig set up a portal generator on the roof and opened a dimensional rift to an army of Chitauri warriors waiting on the other side. Heavy fighting caused extensive damage to the upper floors during the attack leaving the only letter to remain from the Stark logo being the "A", as a deliberate nod to the signature "A" from the Avengers title.

Three years later, Stark reused the surviving "A" in its façade, being nicknamed "Avengers Tower". After rescuing Loki's Sceptre from Hydra, Tony researched on the Sceptre and decided to use its power to finish a stalled artificial intelligence program called Ultron. However, Ultron ended up becoming evil upon inception, shutting down J.A.R.V.I.S. and taking over the Iron Legion bots to attack the Avengers. Stark would later use Stark Tower's facilities to reprogram an artificial lifeform that was being built by Ultron, Vision.

Following the dissolution of S.H.I.E.L.D., Stark made the tower the main headquarters of the Avengers. However, after the Ultron Offensive, Stark refurbished an old Stark Industries warehouse upstate into the New Avengers Facility for the Avengers to use as their primary base while Avengers Tower was repurposed for Stark Industries' use.

Following the Avengers Civil War, Stark sold the tower and had the valuable items and artifacts loaded onto a cargo plane for transport to the New Avengers Facility.

After the passing of Stark, Pepper Stark re-bought the building back to carry on Stark's legacy with his daughter. The top ten floors are all devoted to research and development - as per Pepper's instruction. The bottom three floors are devoted to the memorabilia of the Avengers, including Stark's recent suit.

The exterior of the building has not change since Stark had built the building, however internally there has been few renovations. The first three floors has been renovated to enable the public to reminisce the days that the Avengers saved the world.

White marble floors, and light grey walls enable the memorabilia within to shine.

The ground floor, the Lobby, has a large white round marble kiosk in the centre of the floor. The windows are left open, on the far back wall there are three elevators - two for the public and one that requires thumb print and Digital Retinal Scan for those who work above.

There are many marel coloured bench seats around the lobby, to show the flow of public through the memoriam. 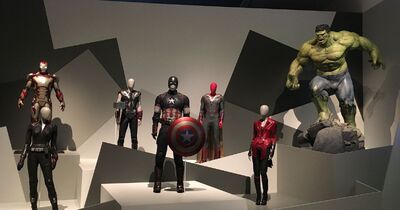 The first floor houses the largest display of the Avengers, they are life-like mannequins to enable visitors the chance to see just how human these heroes are. On this floor there are files up on the walls with descriptions, and stories of the Avengers and their missions.

The second floor, houses the many suits that Stark had shown to the public. Some are battered an bruised whilst others look fairly new. A duplicate of Thor's hammer, and Captain America's shield can also be found on this floor.

The remenents of J.A.R.V.I.S maintains the highest of security within the building, instructed by Alice Stark's V.I.R.G.I.L at the highest order. There are also hired security guards on the exterior perimeter.

The building is impenetrable to outside damage thanks to J.A.R.V.I.S.

Pepper Potts announced in a press conference that, after all damage resulting from the Stark Expo incident had been repaired at the expense of Stark Industries, the relationship between Stark Industries and New York City would make another step towards the future. She presented the plans for a structure acquired by Stark Industries, that would be transformed into the Stark Tower, the first completely clean energy-powered skyscraper in Manhattan, hoping it would become a model for future development in the city.

During the press conference, Tony Stark called Potts to congratulate her and told her that he was waiting for her to have a date with a bottle of Dom Pérignon. Potts told Stark that she was going to give him the benefit of the doubt, and told him she assumed that he remembered their date was the following night. Stark replied that he obviously remembered, as he was in Malibu altering one of his armors.

A few months later, Stark helped in the construction of the tower, lifting the giant letters in the front of the building as Iron Man, when James Rhodes contacted him to learn about the Ten Rings, responsible of his kidnapping in Afghanistan. Stark told him that his investigations after confronting them at Gulmira led to nowhere, as the Ten Rings operated in autonomous cells, and the highest-ranking operative in each cell had one contact in another cell, but not with the overall leader.

Tony Stark finished installing the last piece of an Arc Reactor in the undersea wiring near New York City thanks to his armor, in order to disconnect the newly constructed Stark Tower from the general electricity network, becoming the first self-sustained building in New York. Stark contacted Pepper Potts while returning to the tower to tell her that she could turn on the light. Stark witnessed how the Tower got lit, and entered inside to celebrate with Potts.

J.A.R.V.I.S. informed Stark that Phil Coulson was trying to contact him, but Stark dismissed the call. Potts checked the energy levels of the tower were stable, and discussed with Stark how the idea about Stark Tower came from the Arc Reactor in Stark's chest. Stark suggested Potts that she must attribute herself a 12 percent of the merit, and although he tried to justify himself, Stark realized the comment was inappropriate. Coulson called Stark again, annulling J.A.R.V.I.S.'s protocols, and although Stark tried to dismiss him again, Coulson appeared in the tower, where Potts greeted him on a first-name basis to Stark's surprise.

As Coulson explained that his visit was not based on Stark's status as a consultant for S.H.I.E.L.D., he thought it had to do with the Avengers Initiative, even though that project had been discarded and Stark had been deemed as unsuitable. Coulson handed Stark a tablet containing files about the other candidates of the Avengers Initiative: Steve Rogers, Bruce Banner and Thor, about the Tesseract and about Loki. Potts realized that she must leave Stark alone to let him focus in the task handed over by S.H.I.E.L.D.

Potts asked Coulson if he could take her to LaGuardia Airport to go to Washington, D.C., and asked how things were going with Audrey Nathan, his cellist girlfriend, and Coulson informed her that she moved back to Portland.

Community content is available under CC-BY-SA unless otherwise noted.
Advertisement